The Devil's Playground by Jenna Black 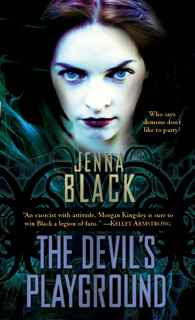 SPOILER WARNING Some spoilers for previous books. Read at your own risk.

This is the 5th, and final (though I didn't know that before I started it), book in the Morgan Kingsley series. I didn't enjoy the first book in this series all that much, just enough to give the second one a shot, but in that one, Morgan really grew on me, and then further through the next two books. But this one is easily my favourite of them all.

Morgan has grown used to having demon king Lugh reside in her, and his advances in her dreams, but after a couple of easy months with no near death experiences for her, they, and Lugh's council on the mortal plain, have grown complacent. They get a rude awakening when Shea, owner of The Seven Deadlies, approaches Morgan with disturbing news: the number of illegal demons in town has risen drastically. Something big is going on, and Lugh suspects his brother back in the demon realm, Dougal - who is trying his best to de-throne Lugh, is responsible. It doesn't take long for Morgan and Lugh's team of demons and mortals to get involved, and deep in trouble again. Only this time they may have to risk everything to stop Dougal succeeding.


Everything in Morgan's personal life is coming to a head as well, as Brian realises he can't ignore that Lugh is with Morgan every second of her life, and what it means for their intimate moments. Likewise, Lugh's stepping up his advances on Morgan in her dreams. Is it really possible they can all get along? With Dougal's plans, it may not matter.


Like I said, Morgan took a while to grow on me, but now I really love her. I love how she's learnt to open up a little and trust through the series, and it really shows here. She's far from perfect but she tries, and that is the important thing. She's grown a lot in other ways as well, through dealing with Lugh and his world in a very different way than she had prior to his arrival. It's been interesting to see the changes in her and how she's gone from sometimes seeming like a bratty teenager who is mad about not getting their own way, to a mature adult who can deal with whatever's thrown at her. I've never been too sure what I think of Brian, but I've finally decided I like him, mostly. I love Lugh, like always, and Dominic and Adam add to the great secondary cast. What surprised me here was the new side of Raphael we saw. I don't want to give any outcomes away, but I will say my opinion of him drastically changed through this book. And I had a similar, if not as deep, opinion change about Morgan's brother too at the end.

Aside from the characters, this book was well plotted. It moved along at a really good pace and kept me pretty well hooked. There were several twists coming that I didn't see, and one point where my denial about what could happen was nearly as deep as Morgan's. The various threads of the previous books come together in this and result in a intense finish. I like that just about everything got tied up, but not too tightly, so you can imagine a future story with these characters past what we've seen.

As well as the main plots, the subplots, Saul and Raphael and Dominic with his new business amongst others, were all woven in well, adding more depth to the story, without wasting pages or taking away from the main story. And despite all the problems and trouble the team face, there are some very funny moments as well, which I liked. I wish there was going to be more books in this series, but at least it got a decent ending. I'll take that over a series run in to the ground any day! And I believe there will be a short story in Morgan's world at some point too, so I'll look forward to that! For sure a series that's ended on a high and one I'd really recommend.

Oh wow, this is the last Morgan Kingsley book? I didn't know that! Wonder what Jenna's going to work on next?

I have this on my TBR pile as well. It's currently at 4-ish, ish being that I am waiting for the stupid mail to bring me my book which I thought I would get today, no dice.

Glad to hear the book was good. Can't wait to see how everything all ends.

Yep :( I didn't know either but the ending made me curious so I asked Jenna on Twitter and she said yes, but that there would be at least one short story. Which is better than nothing, but still, I'm sad. Just when I'd grown to love Morgan!

She's got her first YA book due out in May, Glimmerglass, and judging by her tweets, she's got something else sold, but no details yet, and something else she's working on but hasn't sold yet, so sounds like fair bit coming from her still, even if no more Morgan.

Yeah I saw that on her Deadline Dames post today. Oh well, a new series to read will be good.