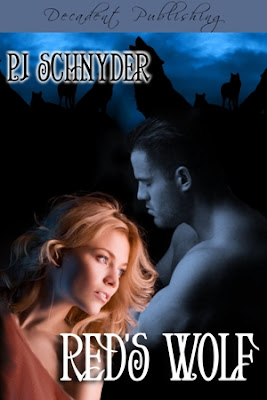 
Carri has definitely caught the eye of the big bad wolf.

Visiting the Glacier Valley pack to get a little breathing room from life in the city, Carri uses her skills to help install a high tech airspace sensor array for her adoptive grandmother’s pack. Jason is a lone wolf, good at doing his job and good at being alone. Sparks fly between them, igniting desire hotter than Carri's red hood. But the Glacier Valley pack has made it clear Carri is under their protection and off limits. Yet, the heat between them is undeniable, and when Carri makes her choice clear, Jason is ready to claim her as his. He'll go against the pack and any rivals, even take down an alien hunter to have her and protect her

Nayuleska's reasons for loving Carri...although Carri was nice, it took a while for me to be totally at ease with her She's very determined, and will not take being dictated to by her well meaning but over cautious family. Just because she isn't a shape shifter doesn't mean she isn't aware of how pack society works - a fact that makes her remind the pack that they are neglecting their duty a little towards Jason.

How evil/nasty is the enemy? I haven't read this for a few days, but the mere title 'Hunters' has me looking around very cautiously. They are inhuman - I'm not talkig not human - the pack are part human, but hunters are evil, goal driven and determined to hunt the pack down. So what if Carri gets in the way - she's still in pack territory.

Are there plenty of plot twists and surprises? Not heaps, it was pretty clear where the story headed (it felt shorter than book 1...which I did mind a lot).

One of my favourite parts was...when she puts the needs of others first above her own safety (remember that she isn't a shapeshifter...so doesn't have extra strength/weapons in combat)

This gets 8/10 - it felt a little too short (perhaps I was spoiled with the length of Heart's Sentinel), and Carri's story wasn't as exciting as MacKenzie's.

Be sure to check out more about PJ Schnyder on her website.


You absolutely have to read Heart's Sentinel, the first book in the series (much longer than RW). It's awesome and one of my top favourite shapeshifter novels.

Alpha, by Rachel Vincent, Follow Faythe as she lives with her pride, struggling with all the rivalries and politics (remember, this is the last book in the series, but it is seriously awesome) Cem has actually read the entire series, which starts with Stray (reviewed by Cem).  (Yes I'm aware it might look odd putting the last book first, and the first book last - its just the way I've done it :)

Hi Im a new follower. I see youve read few books that i did as well.
cute blog.
anyway care to follow mine? LALAINE'S FICBOOKREVIEWS thanks