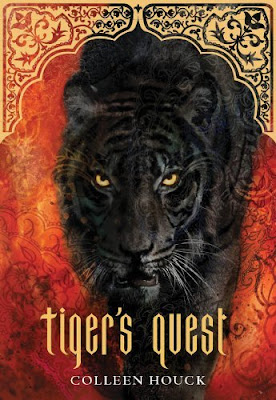 Summary from Hodder
Back in Oregon, Kelsey tries to pick up the pieces of her life and push aside her feelings for Ren. But danger lurks around the corner, forcing her to return to India where she embarks on a second quest-this time with Ren`s dark, bad-boy brother Kishan, who has also fallen prey to the Tiger`s Curse. Fraught with danger, spellbinding dreams, and choices of the heart, TIGER`S QUEST brings the trio one step closer to breaking the spell that binds them.

Nayuleska's reasons for loving Kelsey...she moved past the acting in a weird way from book 1, I simply adore her new power (zap! kazap! zaaaaaaaaaap! (bad impression of what her power is without giving it away), she suffers a lot on the quest with Kishan, which is sort of balanced with the incredibly useful gifts and weapons she receives.

Is there another character who deserves a mention?...the fairies! They are quite minor characters but I think how they live and work is really cool. I'd love some as night lights in my room.

How evil/nasty is the enemy? Incredibly cruel, as it involves torture. There are lots of sub enemies on the quest, who have to stand strong as Kelsey and Kishan risk their lives to get to the next stage.

Are there plenty of plot twists and surprises? Once again it took a very long time for the action to occur, and there was much less conflict in the first part of the book. I hasten to note that now I'm more used to Colleen's style of writing, the lack of conflict didn't bother me so much. When the twists happened near the end, they were clever ones.

My favourite part was...when Kelsey is helped by the fairies! It's very magical.

I give this 7/10, and I'm eagerly awaiting the third book.

Find out more about the Colleen and the series on the dedicated website.


Definitely check out book one, The Tiger's Curse (even though I gave it a low rating, it is quite necessary to understand the background information in Tiger's Quest)

Email ThisBlogThis!Share to TwitterShare to FacebookShare to Pinterest
Tags: YA

Fairies??? Where did the fairies come from? I haven't got that far yet but that has disturbed me a little. I can't see how they fit in.

Er, later on when she's doing the quest. The fairies are very very very minor characters, and are very tiny. It does fit, I promise!