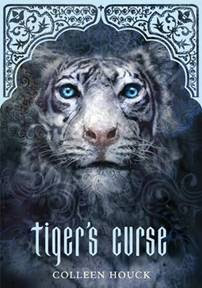 Would you risk it all to change your destiny?

The last thing Kelsey Hayes thought she’d be doing this summer was trying to break a 300-year-old Indian curse. With a mysterious white tiger named Ren. Halfway around the world. But that’s exactly what happened. Face-to-face with dark forces, spellbinding magic, and  mystical worlds where nothing is what it seems, Kelsey risks everything to piece together an ancient prophecy that could break the curse forever.

Nayuleska's reasons for loving Kelsey...she hates snakes and camping as much as I do. She seems to have a personality change halfway through the book, and I couldn't understand her motives for her actions and feelings towards Ren.

Any other character who deserves a special mention? Ren - come on, tigers are really cute! Especially white ones.

How evil/nasty is the enemy? Until the last part of the book, there wasn't an enemy or much real conflict before page 300. I'm not entirely sure where the conflict kicked in, I stopped checking page numbers. However, the kappas and monkeys were rather scary.

Are there plenty of plot twists and surprises? Only a few scattered around the book, certainly not as much as I'd hoped there to be for a series like this.

One of my favourites parts was...when Kelsey got to try lots of different food! I could almost smell all the spices and herbs.

I'd like to make a note that where it says in page 74 'In Islam, it is believed that Allah will send a tiger to defend and protect those who follow him faithfully , but he will also send a tiger to punish those he considers traitors', as far as I know from personal experience, this isn't entirely accurate. A beast will be sent, who has some elements like a tiger, but certainly isn't an entire tiger - most of it will be constructed of different animal parts. I haven't ever comes across a passage in the Quran or elsewhere that says it's a tiger, so that might be a regional interpretation of what the beast will look like.

Because of the lack of action/twists, and Kelsey's dramatic and incomprehensible (to me) change in character, I give this a 5/10.

Find out more about the Colleen and the series on the dedicated website.

Or check out Rachel Vincent's series which ends with Alpha

Email ThisBlogThis!Share to TwitterShare to FacebookShare to Pinterest
Tags: YA